EVOLUTION OF THE PRIVATE MARKETS

Evolution of the Private Markets: An Assure Analytics Series

The world is witnessing a shift in the way investors allocate capital and build investment portfolios.

Historically, a combination of public stocks, bonds, and perhaps some real estate was considered a “diverse” portfolio by many individual and institutional investors. Private asset classes were seen as difficult to navigate, transact, and administer, with higher risks and less liquidity. But over the last few decades, more investors have begun to recognize the potential upside and diversification benefits that can come from startups, venture capital, private equity, hedge funds, art, farmland, and dozens of other privately held assets.

What inspired this shift? Some would point to the success of former Yale endowment manager David Swensen, who took over managing the then $1B endowment in 1985 and shifted the university’s investment allocations towards a wide range of private assets. By 2020, Swensen’s private-markets-heavy portfolio had grown to $31B. While the ‘Swensen model’ has certainly been emulated by many other institutional investors, it’s only a small component of the story. And it does little to explain the incredible growth in individual investors' interest in private assets.

The truth is much more complex and much more interesting. Accordingly, Assure is publishing a new series to help unpack the evolution of private market investing. In each post, we’ll walk through some of the innovations and evolutions that have made private assets both more in-demand and more accessible, with an emphasis on the last decade due to its incredible rate of change. This series will include:

Let’s begin with a look at the shift in value from the public to the private markets, and why investors of all sizes are allocating more capital than ever to private investments.

Private Markets are the New Public Markets and Here’s Why

Investors large and small are waking up to the new reality: alpha is increasingly generated in the private markets. Up until the early 2000s, startup companies tended to go public comparatively early in their growth cycles. This allowed public equity investors to easily invest, and partake in subsequent stock growth.

Microsoft and Amazon are two prime examples: In 1986 Microsoft IPO’d at a valuation of $777M. In 1997 Amazon IPO’d a valuation of $438M. Today, each company’s valuation is near or past $2T (~$2.2T and ~$1.7T as of publication, respectively). In both cases, that’s effectively $2T in wealth creation that accrued to public equity investors. Others include Electronic Arts, Alphabet (Google) and Rackspace. 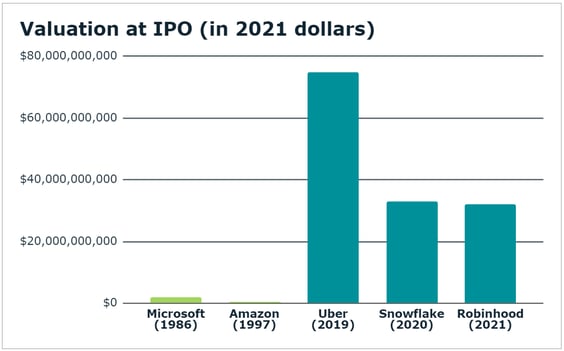 Some of this shift began following the dotcom boom and bust of the 2000s. In 2002, the U.S. Congress passed the Sarbanes-Oxley Act to help prevent financial scandals as seen with Enron and WorldCom. The result was much more regulation, paperwork, and legal cost for companies going public.

As a result, startup companies began staying private longer, raising more private capital at later stage rounds, and IPO’ing at higher valuations. Fundamentally, this means they accrue more alpha to their private market investors. And startups are just one component of the private markets.

It’s estimated that 3.5 times more capital is allocated to the private markets today than a decade ago. In just the last year the number of U.S. private funds (including private equity, venture, hedge, and SPVs investing across a range of alternative assets) grew by 9.9%.  Moreover, the assets invested in these funds grew by 16.1%. With public equities at near-record levels (in stark contrast to the stock markets during the Global Financial Crisis), investors are even more eager to diversify into private assets. Research has also shown that institutional investors with “the biggest allocations to private markets outperform their peers,” inspiring others to shift their strategies and lean into private assets. But institutional capital is just the tip of the iceberg. 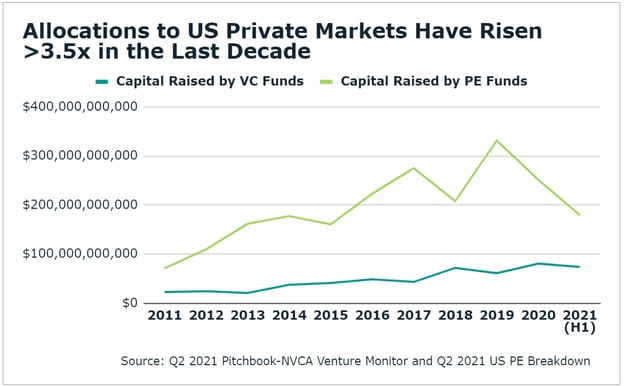 Increased regulation of the public markets has been paired with decreased regulation and innovation around the private markets. Over the past decade, technologists have turned their sights towards financial services (fintech) and regulated environments (regtech), making it ever easier to access alternative assets. Capital has followed. The first quarter of 2021 alone saw record investment in fintech funding, with $22.8B going into companies changing the way the world invests (98% YoY growth).

At Assure, we know it’s in the early innings. To help ensure investors are equipped with the knowledge to navigate the future of private assets, let’s look back at the series of innovations, adaptations, and evolutions that drastically changed the state of private market investing. This series explores how we got to where we are today.