This article presents an analysis of how Family Offices are leveraging SPVs. It is based on more than 200 SPVs formed through assure by 50 Family Office and Multi-Family Office organizers from 2014 to the present.

In recent years the number of Family Offices (FOs), the wealth they possess, and their role in the private markets have increased dramatically.

By some estimates, 58% of current FOs have been founded since 2000, with 20% forming since 2014. And these asset managers (often controlling $1 billion or more  in assets under management) have shown a growing appetite for private market allocations. The percent of global venture deals with FO participation rose from 2.7% in 2014 to 4.2% in the first half of 2021. What’s more, some surveys suggest up to 40% of FOs have doubled their allocation to the private markets more broadly in the past 5 years.

Although FOs and MFOs (Multi-Family Offices) leverage a variety of structures to access the private markets, many have already recognized the utility of SPVs to capitalize on opportunities: SPVs offer optionality, control, and access. SPVs are used to syndicate rounds with family office networks, to protect against legal risk and liabilities when making direct investments, as well as to access follow-on deals for outperforming investments in a fund. Fundamentally, SPVs allow a family office to build their own portfolio of alternative assets without having to go through funds.

Until now,  little has been published about the role of SPVs in Family Office portfolio strategies and how FOs typically leverage SPVs. In this article, we begin to shed light on Family Office use of SPVs.

The following analysis is based on more than 200 SPVs formed through Assure by 50 Family Office and Multi-Family Office organizers from 2014 to the present.

Growing Use of SPVs

Mirroring SPV usage trends in the broader markets, during the last seven years Family Offices have accelerated the number of SPVs formed and total capital raised through those SPVs. In 2021 alone, Family Offices pooled more than $260 million through 81 SPVs. 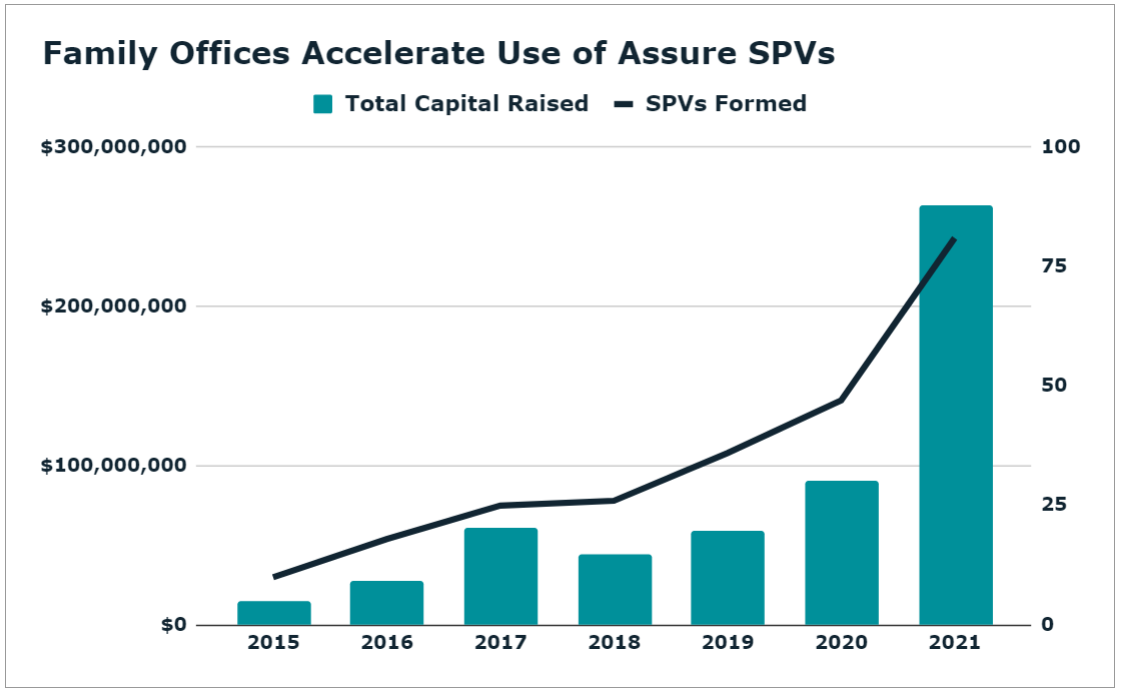 Although Family Offices raise SPVs across the size spectrum (from sub-$100,000 to more than $10 million), compared to the overall SPV market, their SPVs concentrate at the higher end of the asset range.

The average amount of capital raised by a Family Office SPV ($4.2 million) was roughly 2.8X larger than the overall market in 2021. Further, whereas just 30% of the overall SPV market raised more than $1 million for a single vehicle, over two-thirds of Family Office SPVs passed this threshold.

Logically this makes sense. Family Offices, like other institutional investors, manage massive portfolios. A typical rubric for these investors is that each investment (deal or fund commitment) must equal ~1% of the total portfolio size. As a result, their minimum check size is larger, to align with the large overall portfolio under management.

Growing Use of SPVs

SPVs raised by FOs have fewer investors participating on average (19) than the broader market (24), and they’re also less likely to be single-investor SPVs (3% vs 9.5%). As the below chart shows, Family Office SPVs cluster more closely in the 11 to 50 investors range, appearing to avoid either extreme.

This suggests Family Offices aren’t simply using SPVs as structured vehicles to make “personal” investments that deploy only the family’s capital, but are predominantly acting as deal syndicators and pooling capital from other investors as well.  It’s known in the industry that family offices tend to “hunt as a pack”... preferring syndicated deals among trusted peers.

This is perhaps indicative of a growing trend where FOs leverage SPVs to make direct investments in startups and other private assets. 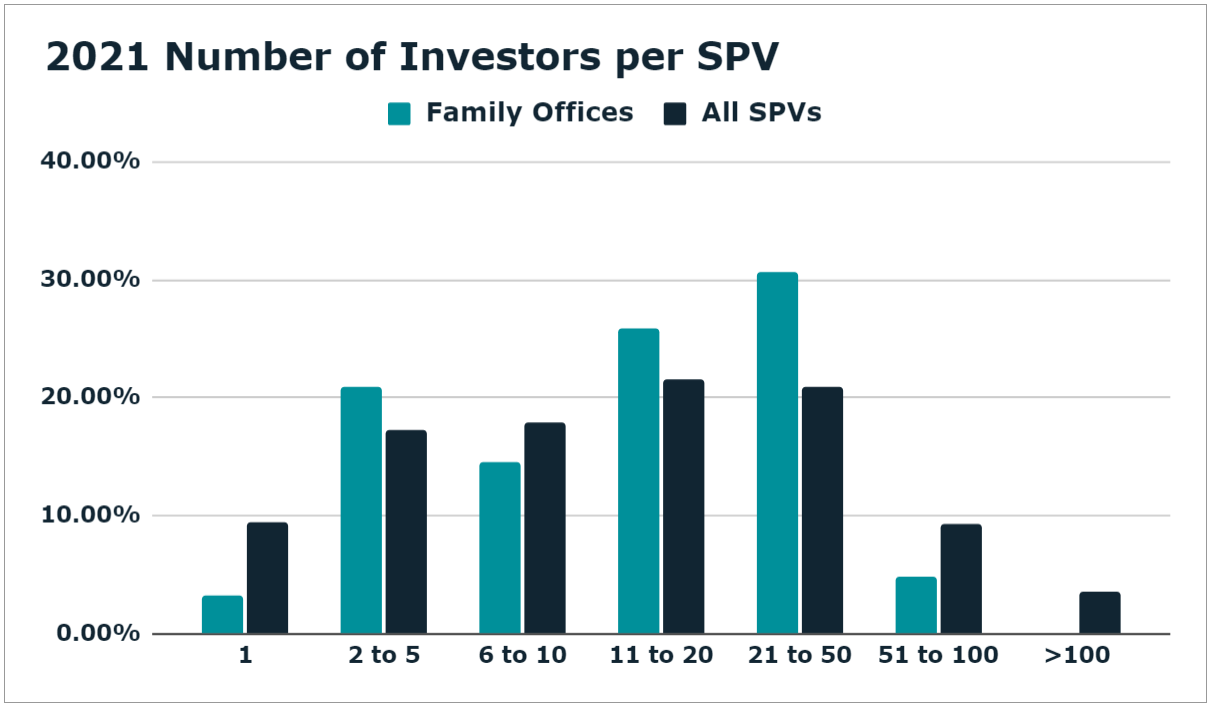 The most common investment type for an FO SPV is, by far, Preferred Stock.

Nearly 60% of SPVs raised by Family Offices in 2021 made an investment via Preferred Stock, with the next most common structures (SAFEs and Common Stock) falling markedly behind at 14% each.

This is especially notable, given the broader SPV market has been shifting away from preferred stock and leans much more heavily into the other investment types than FOs do.

Since 2015, the percentage of SPVs making investments via Preferred Stock has fallen from 57% to just 33% in 2021. This puts FOs at double the likelihood of using Preferred Stock compared to other SPVs.

This may be a reflection of Family Office preferences for larger, later stage deals, which are typically Preferred Stock agreements, vs. earlier stage deals which may be done via Convertible Notes or SAFEs. 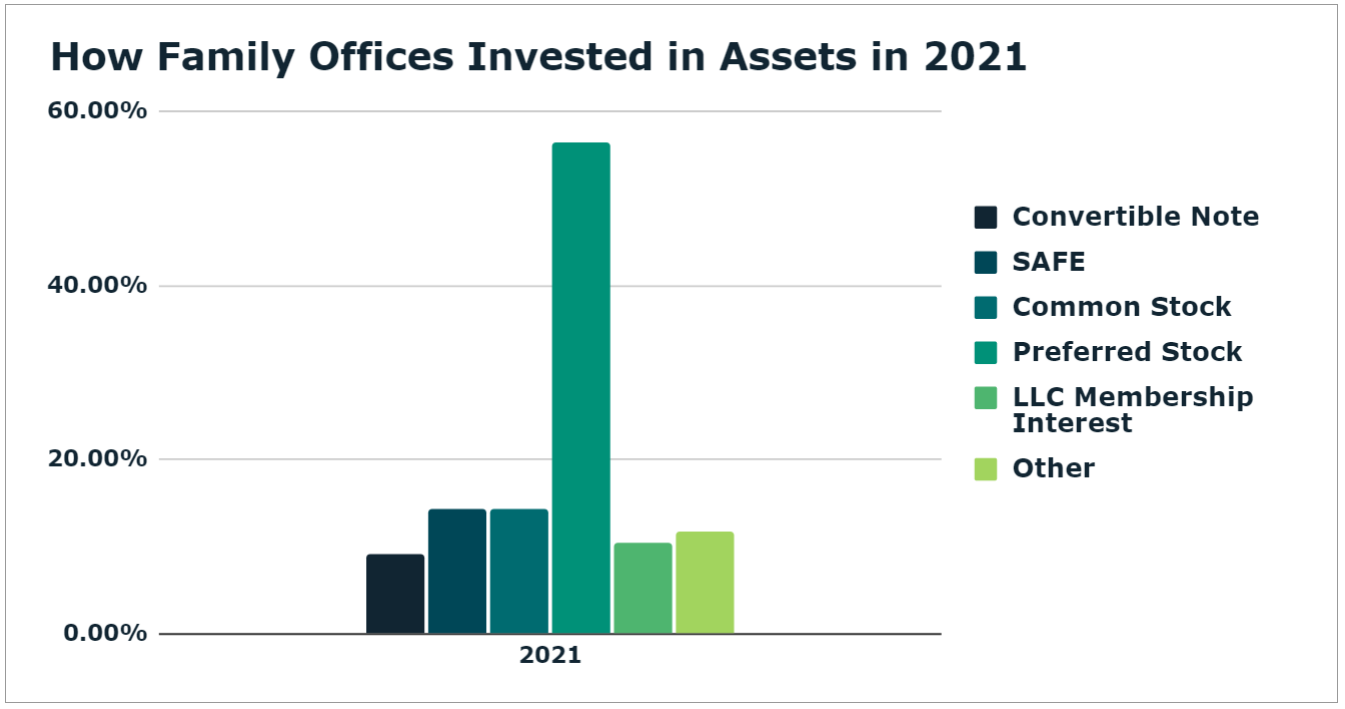 SPVs are a Rapidly Emerging Component of the Family Office Toolkit

Along with increased allocations to the private markets, Family Offices are accelerating their use of SPVs to make investments. Many FO SPVs are focused on startup deals (spanning initial deployments to follow-on and sidecar co-investment opportunities), largely in Preferred Stock deals. But they also use SPVs to access all kinds of alternative assets – from cryptocurrencies to secondaries to fine art, private credit, and real estate.

SPVs offer an ideal structure for expanding allocation to private investments, doubling down on winners, and reducing management fees. We expect to see more use of this dynamic, flexible structure by Family Offices and other savvy investors.

“Family offices are embracing the power of the special purpose vehicle en masse. As the importance of alternatives grows, so too does the role of the SPV. It gives families optionality, control, and access to a range of asset classes without the traditional fund requirements of lengthy timelines and higher fees."