This article presents a benchmark of perspectives from the next generation of venture capital talent on where venture investing is headed. It also assess topics such as market barometers, fundraising cadences, diligence quality and valuations, and track record building.

In the last couple of years, the velocity of venture capital has accelerated dramatically. The fundraising pace of startups has risen, VC firms are compressing time between funds, and many are raising larger funds and deploying more capital to stay competitive. Some funds have restructured their legal frameworks and administrative processes to better take advantage of the changing landscape: Sequoia is blazing a new path by focusing all its capital around a single central fund with layered fees; while other VCs are effectively unbundling, leaning into sidecars or Special Purpose Vehicles (SPVs) to allow investors deal by deal opportunities, capture pro-rata, or reengineer the traditional fund structure entirely.

As with any industry, talent is not stagnant. For venture capital, there is a large group of established general partners (GPs) who are often interviewed and benchmarked on their opinions. But much less is known about the opinions of the next generation of venture leaders — the emerging GPs, venture partners, associates, analysts and principals who may one day take over these funds, start their own, or become household names in the private markets. These individuals not only make up the backbone of much of the venture industry today, but in many cases will become the established and oft-quoted investors of tomorrow.

What’s their perspective on the state of the market and frothiness? Has diligence quality changed as deal velocity has grown? How are they thinking about establishing investment track records and charting their careers?

To gain insight into the perspectives of the next generation of venture investors, Assure partnered with Confluence.VC — a community of rising talent in the venture capital ecosystem. Confluence provides its members the operating playbook for venture and growth equity, while facilitating active conversations and unique insights across the entire venture capital stack. Assure Analytics — the market intelligence arm of Assure — worked with Confluence to survey its members and benchmark the perspectives of the next generation of startup investors.

The following data reports on a survey conducted by Assure Analytics with Confluence.

The survey polled Confluence members about their experiences with and perspectives towards the venture market and startup investing. The 25 responses are summarized below. Respondents were segmented by  role:  Decision-Makers (e.g. General Partners, Managing Directors, Vice Presidents, etc.) versus Junior-Level (Principals, Associates, Analysts, etc.) – as well as by location – East Coast versus West Coast versus Other. Respondents were predominantly US-based, though some international perspectives are captured in the ‘Other’ category.

Note that attempts were made to generalize the findings for broader market insight, but keep in mind this only holds if the sample is representative.

As mentioned above, broader industry findings have identified accelerating VC fundraising cadences in recent years. And it appears the perception of the next generation of venture investors aligns with this trend: 80% of respondents reported that their firm increased its fundraising pace over the last two years.

Interestingly, junior-level professionals were more likely to report an increased fundraising pace than decision-makers. Given the make-up of Confluence members, this perhaps reflects that quicker post-pandemic fundraising was more commonplace for large, established VC firms (where the junior-level folks work) than newer VC managers (which are more represented by the decision-makers at Confluence).

Additionally, East Coast respondents stand out for a relatively high percentage reporting their firm did NOT increase its fundraising pace.

Respondents with accelerated fundraising cadences reported that the driver of the increased pace was more likely to be deployment rate than increased LP demand. This points to VC firms raising more capital faster in an attempt to chase a growing number of promising opportunities or to keep up with their peers (with growing valuations, quicker pro-rata rounds, etc.), rather than an attempt to keep up with LP demand (though that has grown, too).

West Coast respondents were more likely than other regions to report investor demand as the driver of accelerated fundraising. This could suggest greater LP demand for access to venture capital disproportionately landed in the Bay Area and rest of the West Coast.

Outlook on the Venture Market

A majority of respondents (52%) agreed that their fund had to sacrifice due diligence and pricing sensitivity to get into the best deals. This is further support of a narrative already being reported, where the heat in the venture market has caused many funds to make investment decisions faster and pay more than they would prefer.

Overall, decision-makers appear more hesitant to fully agree with the above statement on diligence and pricing sensitivity (50% responded neutral and none strongly agreed). It could be argued that junior-level investors perhaps have a more objective opinion on this trend, since they may feel less of a need to rationalize the actions of the firm.

West Coast respondents have the highest proportion disagreeing that they’ve had to sacrifice diligence and pricing sensitivity (40%). In other regions, no more than 25% of respondents disagreed. This could suggest trends in the venture market have, in essence, pushed the rest of the U.S. closer to the West Coast’s diligence timelines and price expectations. Perhaps this was a function of Bay Area VCs spreading out geographically during the pandemic-induced remote-work trends, bringing their fast investment pace and price (in)sensitivity with them.

Relatedly, nearly all respondents agree the current venture market is bullish or overly bullish (88%). While some variation exists between decision-makers/junior-level investors and East Coast vs. West Coast vs. Other, it’s minimal. 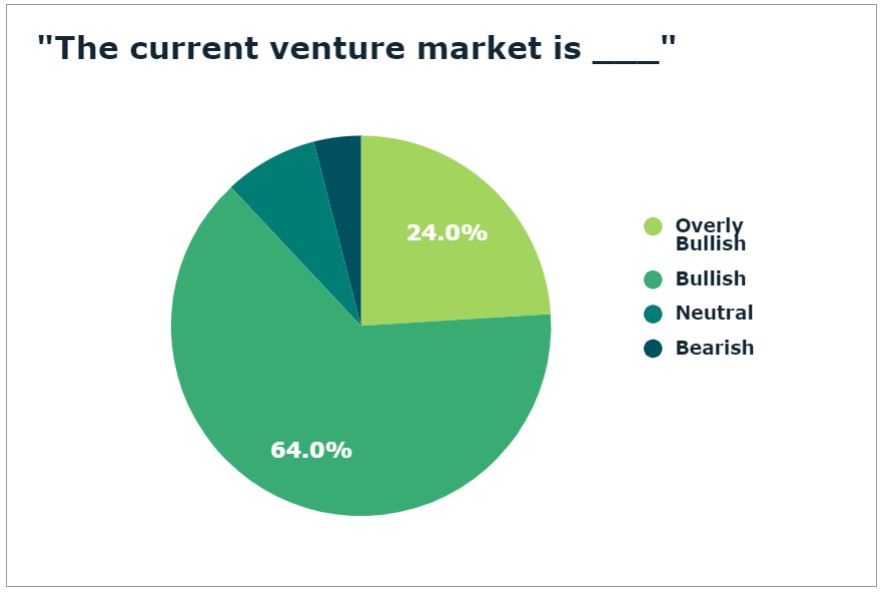 When asked about future plans for investing in startups, 60% of respondents reported they would be leveraging traditional fund structures (either at an established fund or through their own firm). A further 20% plan to leverage both traditional funds and single-asset vehicles (SPVs), and 16% plan to focus exclusively on SPVs through an investment syndicate. Only 4% reported they don’t plan to invest in startups.

Junior-level investors are more likely than decision-makers to plan to become a GP at an established fund (47%), rather than investing through their own firm. This may hint younger investors are trending more towards climbing the partner track at large incumbent firms, possibly seeing less viability in running their own venture capital firm and competing with big existing players.

The West Coast and Other regions stand out for a high proportion of respondents planning to run an investment syndicate that leverages SPVs for deal by deal choice (20% and 25%, respectively), instead of taking a traditional fund route.

Additionally, decision-makers are much more likely than junior-level investors to say they plan to either build an investment syndicate or use a hybrid fund structure that leverages SPVs (60% vs 20%). This could be influenced by the decision-makers having more experience attempting to raise capital from outsiders [see following section]. This group consequently has first-hand experience of the difficulties in pooling $25 million to $100 million from LPs, and/or have received direct feedback from LPs that they prefer being offered the flexibility of SPVs.

Despite more than 50% of respondents planning to invest on their own in the future, a majority still have limited to no personal track record.

Forty percent of respondents reported they have yet to establish a personal track record in startup investing. An additional 28% have only made a few personal investments, not yet having invested any outsider (LP) capital.

Of those with a track record, the respondents are split between having a traditional fund’s performance assigned to them and having syndicated deal experience.

Perhaps unsurprisingly, junior-level investors largely lack any attributable track record investing LP capital: just 13% have any kind of syndicated deal experience and none have a traditional fund attributed to them.

By far, the main hurdle faced by junior-level investors in developing a track record is a lack of capital. Nearly three-quarters (73%) cited capital constraints as a substantial barrier.

Of less concern to junior-level investors is limited deal flow, meaning younger VC investors are much more comfortable on the startup investing side of VC than the LP management side. This makes sense given junior-level roles at VC firms largely focus on sourcing and diligencing investments, being mostly siloed from fundraising.

SPVs offer a low-cost, low barrier-to-entry way to gain access to the startup market. Compared to other fund structures, SPVs are simple to set up and manage, and help an organizer harness small (or large) checks into specific investments. They also allow individual deal syndication with a network of investors in a structure that lets LPs write smaller checks and effectively ‘test-run’ a new manager. Investor commitments and SPV sizes can be much smaller than the norm with VC funds: a large segment of the market is sub-$250K SPVs with investor minimums as small as a few thousand dollars. Fundamentally, SPVs can help organizers build a personal track record while building trust with their LP network.

Given a large percentage of respondents have yet to build a track record, it’s interesting to see just 20% have used SPVs as a mechanism to establish investing experience.

Decision-makers are much more likely to have leveraged SPVs (50% have done so or plan to do so), whereas 0% of junior-level investors plan to or have already used SPVs. This is particularly noteworthy given that junior-level investors cite capital constraints as a primary barrier to their track record, and SPVs require just a fraction of the amount of capital a blind-pool fund requires to get started.

The venture capital and startup funding ecosystems are constantly evolving. In the last few years, capital flows into both startups and VC funds accelerated dramatically, and VCs adopted new investment strategies and structures. To chart the future of professional startup investing, we worked with Confluence.VC to survey their members – the next generation of VCs — to learn their perspectives on the market.

Over the last decade, VCs raised and deployed more capital in a record breaking bull market. In many cases this resulted in valuation and due diligence pressures, and VCs stepping away from preferences to get into hotly competitive deals.

While the vast majority of next-generation VCs intend to continue investing in startups, they differ on the best path forward: some hope to make partner at established firms; some intend to launch their own; and some intend to lean into syndicating deals via SPVs or a hybrid thereof.

The bulk of this rising cohort of professional startup investors are early in the process of building a track record, with some having no track record at all. The most common hurdle they face is limited access to capital to get started, despite a plethora of promising deals.

Many emerging managers use SPVs to test the waters and demonstrate their credentials. SPVs enable new dealmakers to gather a group of investors – with accessible minimum check requirements – into fast-moving deals.  They allow aspiring VCs to partake in carry and build attributable track records.

At Assure, over a third of our SPVs are below $250,000 in assets, backed by just a handful of investors. This fast-growing segment of the market serves as a testing lab for the next generation of rockstar VCs. It further establishes Assure as a leader in the movement to level the playing field, to allow more investors to profit in the private markets, and to enable anyone to become a VC.