Part IV of the Evolution of Private Investing series covers the expansion of investable products and private market access.

Access and choice are critical components of any market. In the private markets, investors have historically been quite limited in their abilities to access, discover, and invest in different asset classes. For most investors, funds and other investment vehicles were hard to find, and typically had very high minimum ‘ticket’ sizes. Over the last decade, this changed significantly. This article will examine two notable drivers: 1) more investable products at more affordable price points and 2) more ways for people to invest. Some of these innovations are rooted in new technologies (as discussed in Section 3), while others are built around new investor talent, new regulations, and new approaches.

This is Section 4 in our evolution of private markets series. This and other segments in our series offer chronology and context on how the private markets got to where they are today. The parts of the series includes:

The range and scope of ways to invest in the private markets has changed drastically over the last decade. In the past, investor options were often constrained by large minimum check sizes and limited access. A large VC or PE fund, if you could even manage to meet the General Partners to discuss investing in their fund, would require a multi-million dollar commitment from you to participate. Art had to be purchased as a whole unit. And finding like-minded investors who were equally motivated by a real estate deal was left to the pros. Today, there are thousands of funds, platforms, syndicate networks, and other ways you can deploy capital into the private markets. Fractional ownership of assets is made easier through special purpose vehicles, automated ownership tracking, and blockchain technologies. Flexibility at more broadly accessible check sizes is here. A few key expansions to the private markets include:

2007 — Micro VCs start to change the investable landscape. In the summer of 2007, Jeff Clavier launched Uncork Fund II as one of the first ‘micro VCs’ to invest lesser amounts into startups at earlier stages. By virtue of their size (Uncork I was $15 million), the minimum investment for prospective investors  (or LPs) was a lot smaller. Micro VCs commonly set $250,000  as their minimum ticket, but many will accept smaller investments, particularly if you add value to the firm and its portfolio companies (we’ve seen $50K, $25K, and even as small as $10K minimums for some micro VCs).

2010s — 1000s of new venture funds emerge. Following the Global Financial Crisis, there was massive growth in the number of Micro-VCs. These VCs manage smaller funds, and frequently have specialized and thematic investment theses that resonate with investors who care about those issues or industries. These VCs also tend to be more diverse, which appeals to investors who want to proactively back women and partners of color.  By nature of their size, these firms needed simpler legal documents and cheaper back office resources so as not to overload their funds with high administrative costs (see Section 3 for additional discussion on these innovations). And given the increased competition among so many investors, speed began to matter even more: deals had to be done fast, requiring the documents and process to be simple. 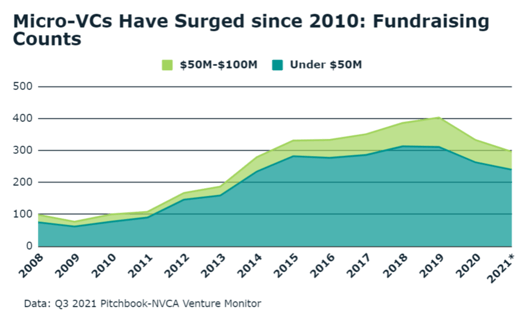 2010 — AngelList launches, marking the start of the investment platform era. AngelList put the ‘angel investing experience’ on the Internet, creating a marketplace where angels could find and invest in startups. To streamline this, AngelList partnered with Assure (2013) to help bundle investors into SPVs and simplify the back office experience. Notably, AngelList optimized for the Silicon Valley experience, with an emphasis on social networks and momentum. While this approach doesn’t appeal to every investor, it caught the global startup community’s attention and led to many other investment marketplaces.

2010s to today— Secondary investments become a more active component of online investing. Depending on the asset, secondaries enable shareholder / LP liquidity as well as the exercising of employee options in privately held companies. While SecondMarket had been leading the online secondary charge for a decade at this point (founded in 2004 by Barry Silbert), 2013 saw the launch of EquityZen, 2014 saw the launch of Forge, and in 2015 Nasdaq bought and integrated SecondMarket, becoming Nasdaq Private Markets. One aspect driving secondary activity during this period was the sheer number of $1 billion-plus valued startups choosing to stay private longer. Today, there are also several specialized managers raising dedicated funds and SPVs to do secondaries with venture capital funds. 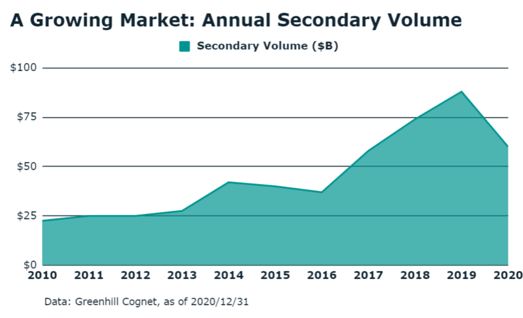 2014 — The first NFT is created, bringing blockchain technology and private assets together.  The Non-Fungible Token or ‘NFT’ is essentially a blockchain-based mechanism to prove ownership of a digital asset. Its advent has since given rise to a robust digital art market today (with $10.7 billion  in NFT transaction volume for Q3 of 2021), where investors buy, sell, and speculate around digital art files and other digital collectibles (think internet sports cards or digital clothing for avatars as a couple examples). The NFT market is rapidly changing, with much hype (real world investment funds have raised capital for NFT investment theses; while Facebook recently rebranded to Meta to lean into the ‘Metaverse’) and many future use cases yet to be invented. Whether NFTs are a lasting trend or a brief fad remains to be seen, but they certainly represent another avenue of choice for investors interested in alternative assets.

Regulatory environments play key roles in whether and how investors are able to access specific markets and asset classes. Many segments of the private markets (at least in the United States) are restricted to ‘Accredited Investors.’ Some investment products are available only to Qualified Purchasers. And others are open to everyone. Regulatory changes also capture the imagination of entrepreneurs, encouraging them to launch new businesses to capitalize on them.

Entire tomes have been written about regulatory history, and we will not bore you with them here. Similarly, this section will not dive into regulatory specifics of other countries, but please note that regulations do vary widely (and in some countries don’t exist at all). But we will highlight a couple of the most recent U.S. regulatory changes that have heavily influenced private investing:

April 2012  — JOBS Act passed by the U.S. Government. The JOBS Act laid the groundwork for equity crowdfunding and increased access to alternative assets. This bill fundamentally opened the private markets (or at least, certain aspects) to mass affluent investors. Put simply: it democratized startup investing, and enabled millions more investors to take part in the rapid growth of the private markets. Of course it also ushered in the need for a variety of process simplifications and improvements to make it easier for new investors to navigate (ex: simpler legal documents, as discussed in Section 3). Suffice to say that SPVs have emerged as the most flexible structured vehicle to pool investors, and they are regularly used by the investment platforms mentioned above and below.

March - Oct 2015 — Final crowdfunding regulations go into effect. Three years later, in 2015 the specific regulations for equity crowdfunding were released and adopted by the SEC, leading to a deluge of new investment marketplaces offering a range of new asset classes to non-accredited investors. Several marketplaces had crowdfunding products waiting in the wings, and publicly launched them shortly after (for example,  Fundrise’s eREITs, as mentioned above).

2015 to today — Online investment platforms and marketplaces launch for other alternative assets. The creation of these platforms was certainly encouraged, at least in part, by the attention placed on alternative assets and private markets from the JOBS act. Not only do these platforms enable access to alternatives and the private markets, but they also reduce the minimum check sizes required. Yieldstreet (2015) began offering private market assets that generate cash flow / ‘yield,’ such as legal and marine financing, private credit, and more. The same year, StockX (2015) and GOAT (2015) launched to facilitate the ownership of collectibles and rare shoes and apparel. Shortly after, Republic (2016) launched its true equity crowdfunding platform to enable anyone to invest in startups (finally greenlit from the prior year’s JOBS Act regulations). And Moonfare (2016) began to bundle individual investors into SPVs to access large private equity funds. The following year, Rally Rd (2017) arrived supporting fractional ownership of collectibles (beginning with cars). MasterWorks (2017) launched with a focus on art. FarmTogether (2017) jumped into the privately-owned farmland fray. And OpenSea (2017) opened its doors to be one of the early players in NFTs (non-fungible tokens) and the ownership of digital assets. These are just a few of the growing roster of online investment platforms enabling investors to diversify into the private markets.

August 2020 — The U.S Securities and Exchange Commission (SEC) updates their accredited investor definition. This update had several tweaks and adjustments, but one notable change was expanding the definition to include individuals who hold certain securities licenses (namely, the Series 7, 65, and 82). The SEC also created an opportunity for other certifications to be developed. At Assure, we know of several groups actively developing courses in conjunction with universities in the hopes of receiving SEC approval.

Regulatory changes and technology advances (as discussed here and in Section 3) combine to fuel rapid growth in the private markets. New regulations are helping democratize the private markets and level the playing field, making it possible for more investors to access more types of investments and to profit from the innovation economy.

At the same time, technology shifts like the rise of the social web expand awareness and understanding on all sides of the transaction, benefiting investors, fund managers, and entrepreneurs. And it turns out that’s a good thing. A decade and counting bull market has created a staggering amount of wealth, and investors are looking for more ways to continue that growth. Our next segment will focus on the more than $100 trillion in investable assets and what that means for the private markets.