SPVs (Special Purpose Vehicles) are a rapidly growing investment product in the private markets. More and more investors are recognizing that the flexibility, speed, and control offered by single-asset vehicles makes them an attractive addition to their portfolios.

But while there’s certainly some editorial commentary on the role of SPVs, there’s a surprising dearth of data-driven research for this expanding market.

Assure Analytics was launched to unleash new insights for investors around the private markets and alternative assets, with a focus on the use of SPVs. Future articles and reports will examine a wide range of private investing topics. In this piece, we’ll look at how “Deal Organizers” or GPs (General Partner) leverage SPVs.

In this article, we’ll explore the growth in Special Purpose Vehicle (SPV) usage, as well as norms around cadences, vehicle size, and LP (Limited Partner) involvement. We’ll also dive into how these norms evolve as organizers become more experienced, granting insight for new SPV managers on how their peers grow.

The following analysis is based on a portion of the Assure SPV dataset; it encompasses over 10K SPVs that have been formed by over 1,000 organizers since 2012. For this analysis we have excluded the top 0.5% of outliers at the upper extreme of SPV activity.

SPVs are gaining favor by all kinds of investors to facilitate investments across a variety of asset classes and deal sizes. Whether a deal is $50K, $500M, or anything in between, the ease and affordability of SPVs increasingly make them a preferred choice for private market transactions.

Assure has experienced this growth first-hand: since 2015, the number of SPVs formed each year has grown 3.7X. Given the fact that Assure has grown significantly faster than other fund administrators, the overall expansion of the SPV market likely sits below Assure’s. But if Assure’s growth is an indication of trends in the broader SPV market, then SPVs are clearly becoming increasingly widespread.

In tandem with the growth in SPV activity is a similar growth in SPV size. Between 2015 and 2020, the average capital raised per SPV grew 3.6X. Simultaneously, the average LP commitment grew a whopping 5.6X. While preliminary 2021 data shows a dip in the size of SPVs, this is likely a function of the steep increase in volume of SPVs and a broader array of investors recognizing that SPVs can work across a spectrum of alternative asset investments. Fundamentally, 2015 to 2021 reflects a nearly 3X increase in average SPV size. 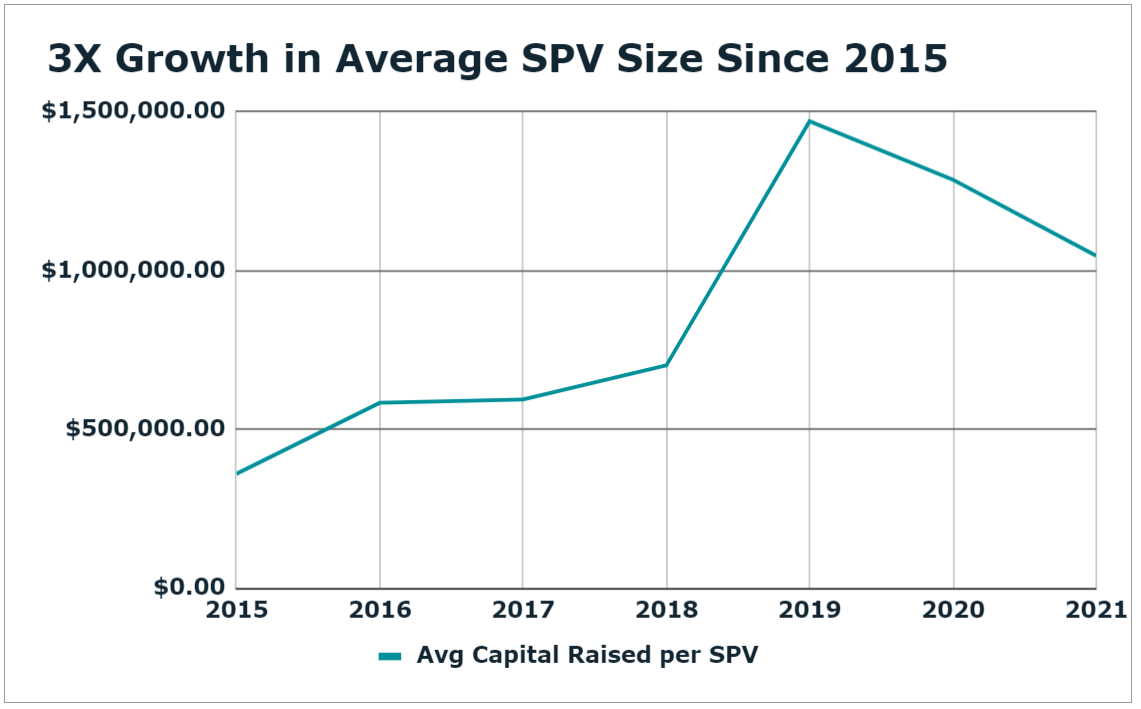 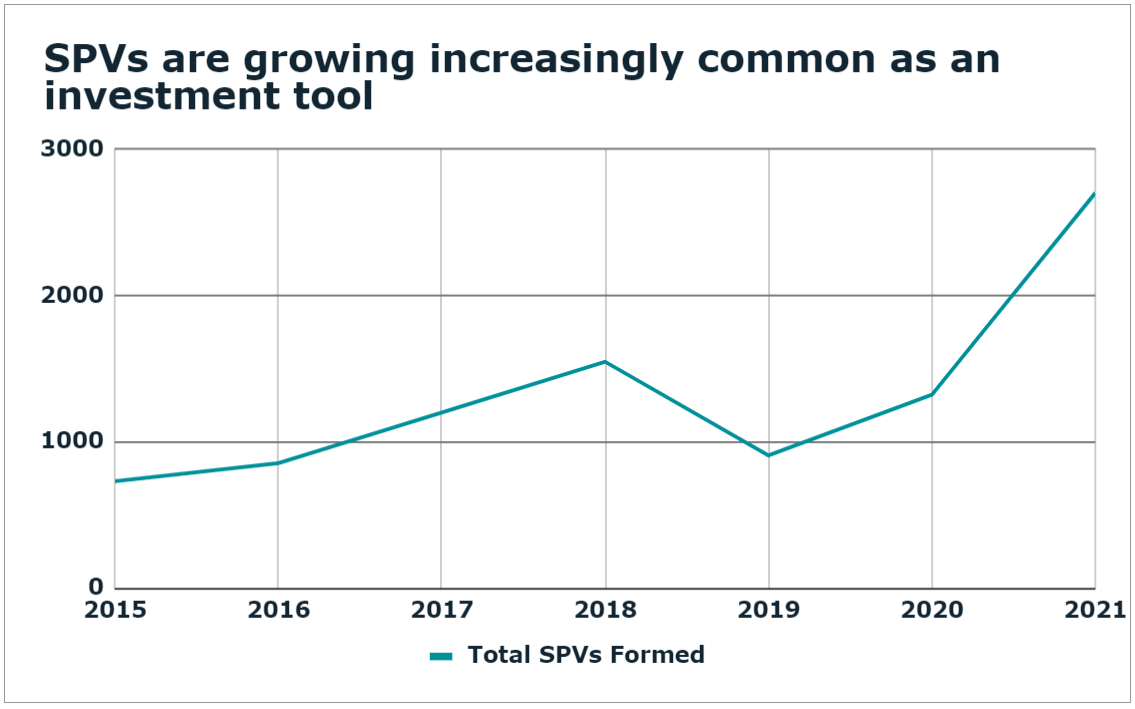 With the overall market landscape in mind, let’s turn to analysis of the ‘average’ organizer. Bear in mind that SPVs are a versatile investment tool and aren’t deployed by any single type of investor. They may be used by VC firms to syndicate a deal’s pro rata with a roster of family offices; by endowments to bundle into a large secondary transaction of a late stage company; by individual investors to pool their capital together to facilitate a rare art investment or a position on a startup’s cap table; and everything in between.

While some SPV organizers leverage these vehicles to make large and frequent investments, the typical organizer utilizes SPVs to make targeted allocations that likely supplement the rest of their investment activities or build a track record.

The average organizer raises just under 4 SPVs per year, with each vehicle averaging $1.4M from 14 LPs. While Assure SPVs range from several to hundreds of LPs, the typical raise is more concentrated.

Compared to the 86 LPs the average VC fund has to manage, SPV organizers deal with a much smaller investor (or LP) base per deal. This is likely a function of different strategies and constraints: while traditional venture funds strive to meet certain AUM thresholds in order to justify costs and management fees, SPVs are not beholden to such limitations. Often, SPVs are executed with a specific deal in mind where speed is paramount, and only the prospective investors who respond in time are able to participate. This is frequently on the order of days. VC funds, in turn, have months (to years) to court prospective investors.

Furthering this point, the average organizer receives an average check size of $180K from each LP, with about 20% of capital coming from foreign LPs. That said, at Assure we’ve seen investor commitments range from $1,000 to 9-figure, hundred-million dollar deals.

Specifically, the typical organizer doubles their SPV cadence between their first year managing SPVs and their third+ year: the average organizer pulls together 2.4 vehicles in their first year, in their second year they accelerate to deploying 4 vehicles, and in their 3rd+ year they accelerate further to 5 vehicles per year. This points to organizers becoming increasingly confident and fluent in deploying SPVs as they progress, utilizing the vehicle to access more investment opportunities and resonate with more investors per year. 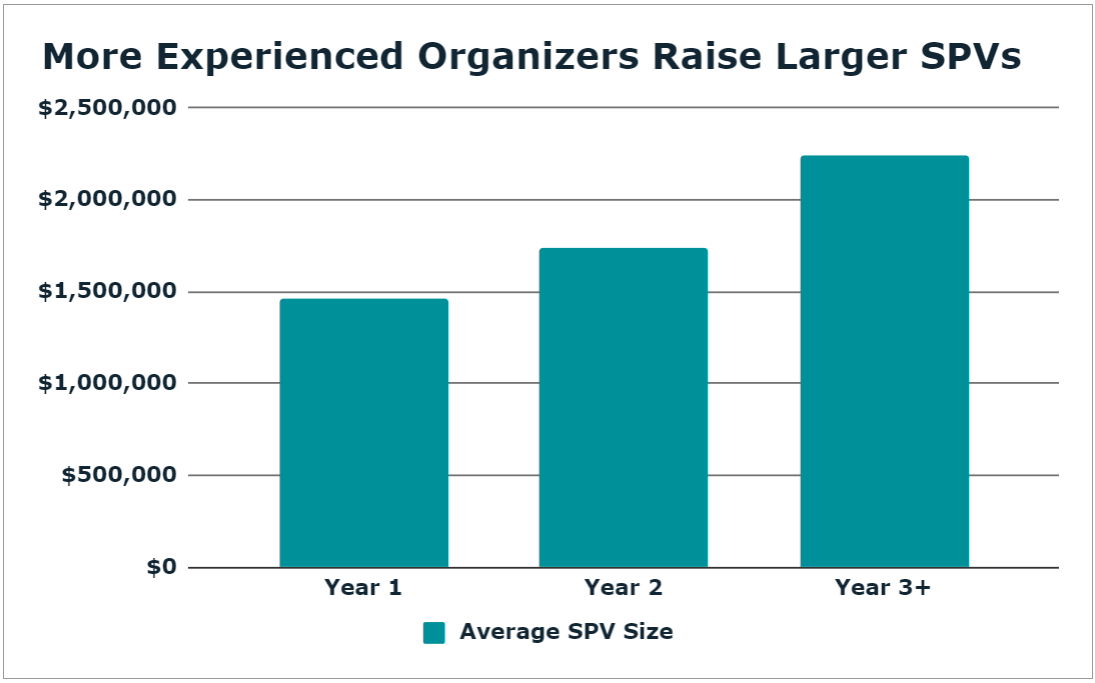 More experienced organizers don’t just increase their SPV cadence; we also found they tend to gradually increase the amount of capital they gather with each vehicle.

Whereas the average SPV organizer’s fund size is $1.4M in their first year, year two sees a moderate 22% increase to $1.7M, while year 3+ rises a further 27% to $2.1M. If we pair this with the preceding section’s data on SPV cadences, that means that over three years, the ‘average’ SPV organizer deploys roughly $20M in capital into approximately 12 deals, which is similar to some emerging VC funds.

We suspect that some investors are proactively moving from a traditional, rigid 2/20 10-year venture fund structure to a more flexible dynamic SPV model. We’ll present additional analysis on this in future articles. 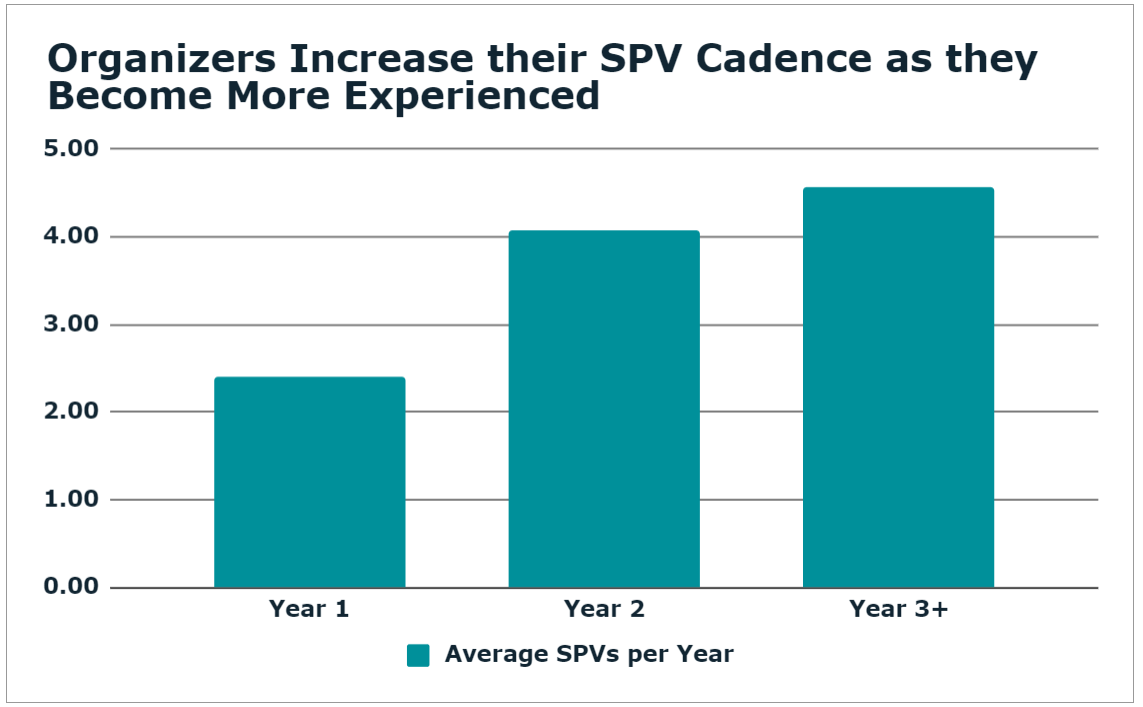 Between their first and third year managing SPVs, the average organizer will only see a 33% increase in the number of investors per SPV, but will nearly triple the average commitment from each investor.

These two trends combined point to investor confidence being the ultimate source of growth in SPV size: LPs who are more confident in the decisions of an organizer early on begin allocating larger sums to subsequent SPVs from that manager. It also hints that more experienced organizers find a natural path to growth as the SPVs under their belt persuade existing backers of their ability to deliver returns. 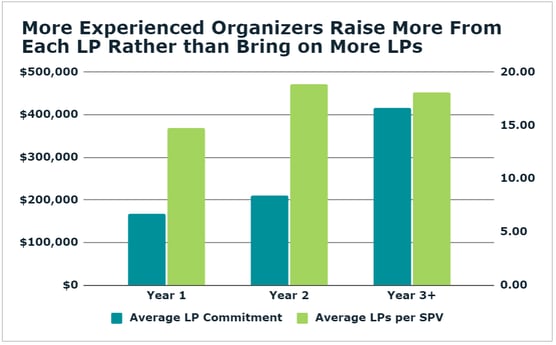 This is just the first of many future data-driven articles and reports examining the private markets. Going forward, we’ll explore a wide range of topics, assets, approaches, and patterns to help investors better understand the market and make more effective decisions. Subscribe to be notified of future research.