There’s a common narrative in venture capital that the majority of players—whether venture capitalists or founders—graduated from an elite or Ivy League institution. It’s a narrative that results in the (misguided) mindset that “all great founders dropped out of Stanford” or “all great VCs have an MBA from Harvard.”

The validity of any statement attributing an individual’s alma mater to their likelihood of success is of course suspect: for instance, there’s some evidence VCs with elite degrees underperform in venture capital. But nonetheless, it’s hard to deny the overrepresentation of MIT, UPenn, and other elite universities among VCs and founders.

But what about among SPV organizers? Given SPVs are a more accessible, democratized form of private market investing, do they show the same Ivy-Elite concentration?

To answer this question, we looked at the educational backgrounds of over 1,500 SPV organizers, with an eye towards the most popular schools. Many of these organizers use SPVs to invest in startups and operating companies, but some invest across other Alternative assets such as real estate, private credit, crypto, and collectibles.

Most Common Schools for SPV Organizers

So which universities are most likely to produce SPV organizers? Perhaps unsurprisingly, it’s largely the usual suspects.

The top 20 includes 6 of the 8 Ivy League schools, Stanford, UC Berkeley, UCLA, Northwestern, NYU, MIT, and Washington University. Other than a few state schools that appear to punch above their weight for the private market norm (e.g. Universities of Michigan, Colorado, Illinois, Virginia, and Maryland), this list mostly aligns with other’s analysis on undergraduate attendance for startup founders and VCs. 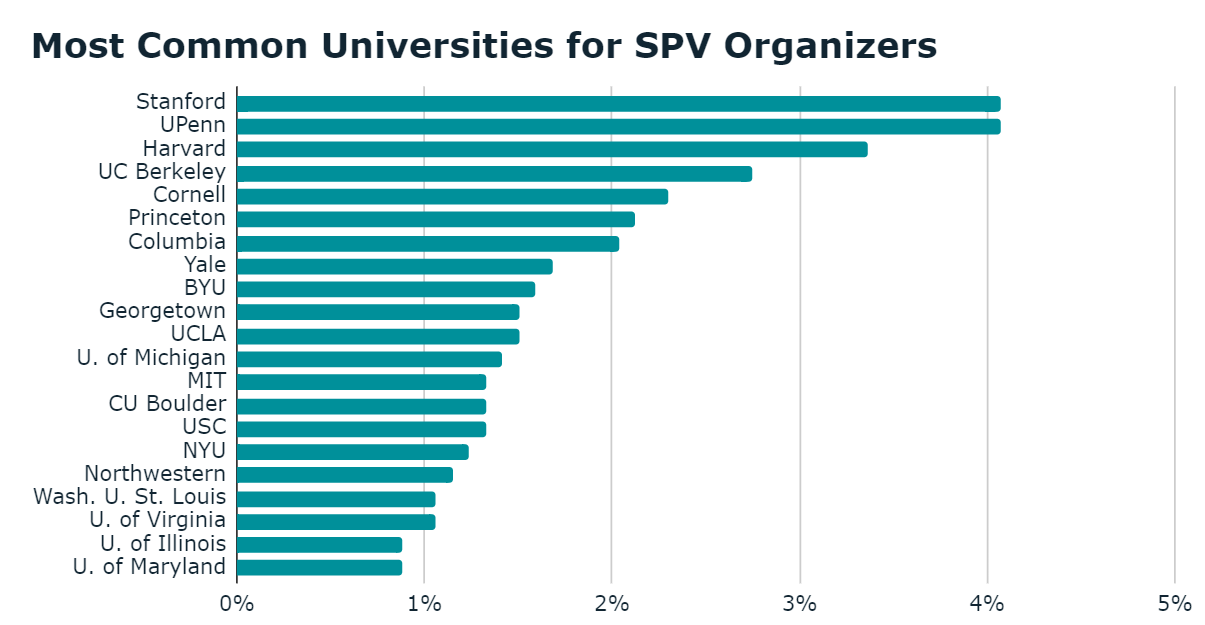 However, it’s important to stress that although the most common schools are elite-abundant, they each account for a fraction of all SPV organizers. For instance, Stanford and University of Pennsylvania hold the top spots for producing SPV organizers – yet combined they account for just over 8% of organizers. This is in stark contrast to venture capitalist Richard Kerby’s findings in 2018, where his survey results suggested that 40% of VCs had attended either Harvard or Stanford.

To further the point, nearly 370 universities are represented by at least one SPV organizer, including schools across the US and abroad.

This extremely long tail means SPVs likely are less concentrated in the hands of individuals with homogenous, elite educational backgrounds. It also means the geographic dispersion of SPV organizers is wider than private market standards.

The below chart maps the top 60 U.S. universities for SPV organizers, showing the number of organizers graduating from each. Clearly SPV organizers come from institutions across the country, not just the traditional hubs of California, New York, and Boston. And this geographic diversity can be a significant driver of other types of diversity that ultimately lead to a more equitable distribution of capital – investors from different backgrounds and perspectives may invest in different kinds of deals. 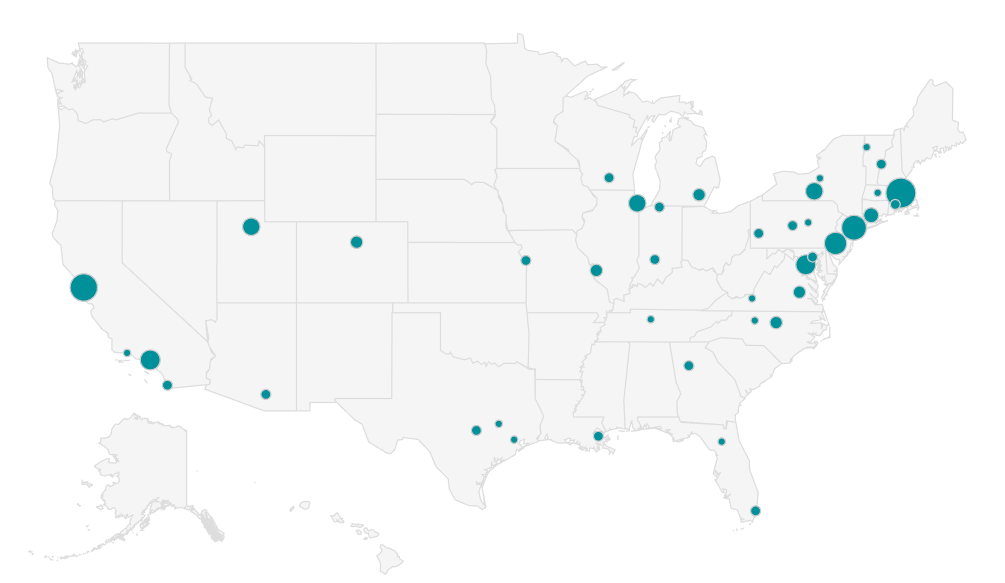 SPVs help democratize access to the private markets – they make it easier and more affordable for accredited investors of all kinds to deploy capital into Alternative assets. It’s no surprise then that the people who organize these SPVs, source deals, and syndicate them to their networks, come from so many different educational backgrounds.

While some studies show that founders and VCs are often concentrated among the Ivy League and elite colleges (with hedge funds and private equity rumored to be even more concentrated), our analysis at Assure shows that the private markets are changing. With nearly 370 unique undergraduate schools driving the usage of SPVs today, we believe such access will continue to expand. Our data shows that SPVs are rapidly becoming the private markets structure of choice, used by all types of investors for all types of deals, across the US and around the world.