SPVs are a significant source of capital for VC firms, providing sometimes massive boosts to the amount of capital a firm can effectively invest in portfolio companies.

While the common fundraising strategy in VC is to raise so-called flagship funds (large pools of capital ranging from several million to several billion dollars), SPVs and sidecars are leveraged by VCs to maintain pro-rata in outperforming startups, selectively invest in promising companies that perhaps don’t align with the strategy of a flagship fund, or offer select LPs greater exposure to a subset of the flagship portfolio.

And though many news and research firms extensively cover trends in flagship funds, less is publicly reported on sidecars and SPVs.

To offer greater clarity into this less-talked-about aspect of the VC market, Assure Analytics is launching a series of pieces researching SPV use among venture capital firms. All analysis in the series combines Assure’s in-house SPV data with US-wide venture capital fundraising data collected by Different Funds, a VC research firm. Combined, the two datasets approach a market-wide track on the SPV activity of US-headquartered VC firms.

This first article attempts to quantify the current state of venture capital sidecars, looking at time trends in SPV count and capital raised since 2018.

Note all data is through Q1 2022, though lags in fundraising announcements could shift final Q1 numbers.

Time Trends in VCs’ Use of SPVs

VCs have been leaning more and more into sidecar vehicles over the last few years. Since 2018, the number of annual VC SPVs grew from roughly 280 to over 600 – more than doubling over just 4 years.

Unsurprisingly, 2021 was a stand-out year for SPV count and capital raised. Corresponding with the rush of capital into startup investments, in the second half of 2020 through 2021, VCs raised record-breaking amounts of capital from a record-breaking number of SPVs.

Given the nature of SPVs in venture capital strategies, this growth could possibly have been a function of many VCs running short of the assets they’d reserved for follow-on in their latest flagship fund. Having not anticipated the ballooning valuations of their best-performing portfolio companies, the proportion of a prior flagship fund set aside for follow-on investments could have suddenly become inadequate. And with round sizes for pro-rata swelling, some VCs may have subsequently required fresh injections of capital outside their flagship raise to continue pumping into startups. 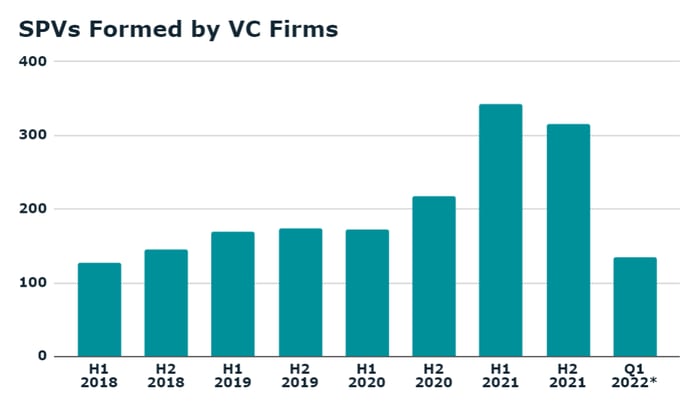 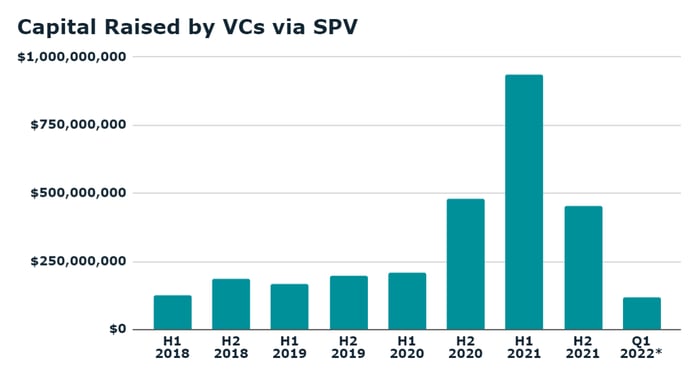 However, despite 2021 being a stellar year for SPVs and venture capital more broadly, initial Q1 data suggests the market may be cooling in 2022.

Assuming Q2 figures continue the rate experienced in Q1, the VC SPV count for the first half of 2022 is on track to sit well below the level set in 2021 (though still higher than 2020 numbers). And total capital raised is actually tracking closer to pre-pandemic levels, likely an early consequence of declining startup valuations.

But of course, it’s entirely possible Q2 (or the rest of 2022) could reverse these initial findings. The Q1 numbers may simply have grown out of a preliminary step-back by startup investors in the face of financial and geopolitical uncertainty, reflecting a re-evaluation of investment approaches rather than a wholesale shift in the pace of SPV use.

In fact, some in the industry speculate SPVs may surge later in the year, as investors tighten their checkbooks in the face of declining public equities and rising interest rates. Such a tightening could push VC fund managers to turn to single-asset SPV raises as they struggle to reach AUM targets for new flagship funds. The flexibility of SPVs gives investors a chance to vet deals individually before committing additional capital to a specific venture firm or strategy, and typically allows investors to write smaller checks as they manage the denominator effect.

We’ll continue to monitor and report on these trends as they unfold.

Stay tuned for the next article on SPVs and VCs: detailing the role of sidecars in a VC strategy, including how much capital SPVs generally add to a VC’s AUM, the proportion of a VC’s LPs that participate in each sidecar, typical round sizes for VC SPVs, and more.